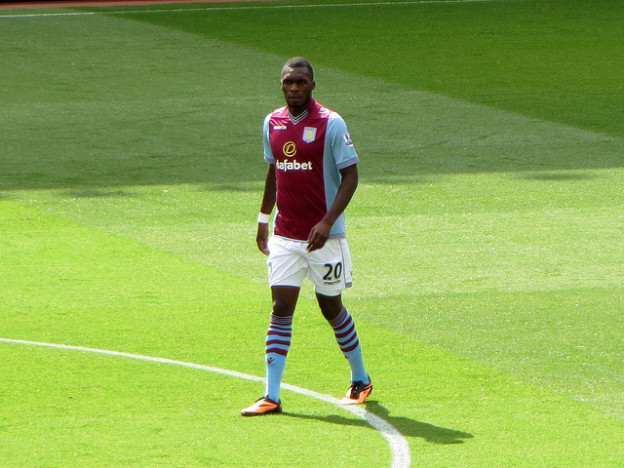 Benteke Liverpool move is close according to some sources so let’s see how is that going to impact his FPL value. At £8.5m he is the most expensive Aston Villa player by far. He is also one of two £8.5m forwards alongside Bony in fantasy Premier League. If he stays at Aston Villa he is a better option than Bony to own as the latter isn’t first attacking option in his team. Benteke was deadly in a three man attack with Agbonlahor and Weimann under ex-Villa manager Paul Lambert. He spent a lot of time on the sidelines last season which affected his form a lot, but ever since Sherwood took over as a manager his form went through the roof. Tim Sherwood apparently knows how to pour in confidence to strikers as he did the same thing with Adebayor following his arrival at Tottenham. He is looking to give more playing time to promising youngsters like Grealish in the season to come and we are going to watch a more exciting Aston Villa team this season. In case Benteke stays, there is no reason to expect sub par performances from him – with Agbonlahor as a partner and with some creativity from the midfield he is going to score plenty of goals.

If Brendan Rodgers seals this deal it is likely that Benteke’s FPL value will go up. He does not look like a player that is going to choke and under perform in a bigger club. He’s got plenty of confidence, strength and class to succeed as a Liverpool player. He will also play with more creative midfielders than he was used in Villa team. Firmino could turn up to be a good signing and the likes of Lallana and Coutinho are players that are capable of killer passes in the final third of the pitch. Henderson and Milner will likely play behind them and this duo knows how to pass the ball as well. Liverpool signed a lot of players last season to compensate Suarez departure but most of them turned out to be a flop. Still this season should be more of a success for them as their defence will be stronger with Clyne instead of Johnson and Steven Gerrard leaving should be a good thing for the Reds as well. That is an atmosphere where Benteke should thrive. He is currently owned by 19.1% of FPL manager and that number should only go up. If Liverpool transfer goes through, Benteke won’t have much of a competition up front, at least not in the absence of Sturridge. Liverpool signed Danny Ings this season as well but he doesn’t seem like a true competition for Benteke They could be paired together up front which could work for them. There is no point even mentioning Balotelli as he just isn’t a serious player which is unfortunate as he does have the talent to play football on the high level. Lambert didn’t get plenty of chances last season and won’t get more in the Premier League season to come. Origi might be an interesting FPL player at £6.0m but his time is yet to come and if Benteke joins Liverpool team, Origi will likely have little playing time. Borini who looks like an interesting player never really got the chance at Liverpool and it is hard to see this season as exception.

Potential downside of Benteke to Liverpool transfer is the fact he is the main man in Aston Villa and he won’t have the same status in Liverpool. Also Aston Villa plays a different style of football, they were very good counter attacking team in the season 2012/2013 when Benteke played his best Barclay’s Premier League season so far. Liverpool likes to bring the ball into penalty area more and Benteke might slow them down a bit. Nevertheless he is the player capable of scoring 15+ Premier League goals, especially when healthy and as such is a very appealing FPL prospect.

All that considered, if Benteke does join Liverpool, his fairly high fantasy Premier League value should only go up. In the price range of £7.5m to £9.5m he is the second most owned FPL forward at this point, well behind Harry Kane from the Spurs but he is also a £1.0m cheaper option and if he stays healthy he could outscore him whether he leaves Aston Villa or not. Kane had played in amazing form which might be hard for him to replicate but Benteke has a room for improvement in the FPL season to come.