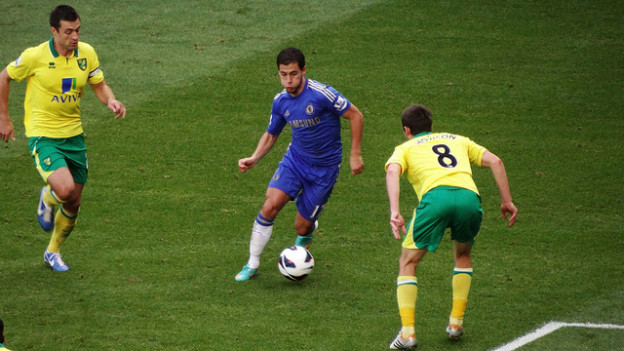 Mourinho won English Premier League in his second season back at Stamford Bridge. He strengthened his team really well, bringing players he needed to patch up the critical areas. Diego Costa, Cesc Fabregas and Thibaut Courtois have all chipped in big time but Eden Hazard was the one Chelsea FC player that really that stole the show. He was also a must have fantasy Premier League player as he was really consistent and finished as a player with highest fantasy score of all Premiership footballers. One more player that certainly has to be mentioned is John Terry in the hart of the defense.

Chelsea FC opens up new Premier League campaign with a home match against Swansea. Win is expected here with possibly a clean sheet, although given the fact it is a season opener we might witness a high scoring match with players eager to play after a summer break. In gameweek 2 there is a derby match on the horizon when Chelsea travels to face runners-up Manchester City. It is hard to say what to expect here, but one thing is certain – Chelsea won’t have an easy match against their rivals that will look to start strong in a journey to reclaim the Barclay’s Premier League title. Gameweek 3 gives us another away match for Chelsea. This time they travel to face a WBA team that should be tough nut to crack as they are defensive minded unit under manager Tony Pulis. Finally in the last gameweek of August Chelsea welcomes Crystal Palace, team that finished last season strong with Alan Pardew as a manager. Chelsea conceded fewest goals in the premier League last season (32) and this is something they might repeat again, but they were leaking goals at the season start. They conceded 8 goals in the last season’s first 4 matches which is 2 goals conceded per game on average. Considering that and how much their defenders are going to be priced for the new fantasy Premier League season I will look to add some of their offensive players to my team and ignore defenders in the beginning. Let’s see who are interesting players to pick from Chelsea squad for your fantasy football team.

Goalkeepers – Thibaut Courtois’ place is safe. He was Chelsea’s first option last season alongside Petr Cech so now when he (Cech) is on the verge of moving to Arsenal, there is not even a slightest doubt about Thibaut’s status in the Mourinho’s squad. Is he worth owning in FPL team? Well it all comes to his purchase price. Personally I prefer saving some cash on the GK position so I will likely look elsewhere.

Defenders – John Terry had a brilliant season and he’s obviously one of the key players for Chelsea but does he have a fantasy appeal? Well yes, but keep in mind he’s 34 now and it remains to be seen if he’ll be able to replicate the last season’s form. Gary Cahill is Terry’s partner in the CB position and depending on his price and Terry’s ownership among Premier League fantasy managers he might be a slightly better option to include in your team. Cesar Azpilicueta impressed last season as left-back and considering Filipe Luis failed to make an impact last season, Cesar could be the least expensive/best option if you want to pick a Chelsea defender. If we are to mention his drawback, he didn’t offer much going forward last Premier League season. Same cannot be said for Branislav Ivanovic who operates on the right. He can score a goal, often converting a corner kick and he’s been a true fantasy stud for couple of seasons now but at the same time he’ll likely be a most expensive Chelsea defender to own. Basically all of the first team Chelsea defenders have fantasy appeal in some extent due to the fact we might expect Chelsea to keep their sheet clean plenty of times, but on the other hand they will have high ownership percentage and price. Looking at the fixture list for the beginning of the season, at this point I am close to the idea of not picking up any of them for my fantasy team, at least in first couple of rounds.

Midfielders – Eden Hazard is the player I will be looking to add to my team, likely in the beginning, as this is the player that will have a high ownership percentage. That means that if he opens the season strong you’ll be in trouble if you are not among managers who added him to the team. He was really consistent throughout the season and he’s your steady source of goals and assists and as a result a lot of bonus points. Cesc Fabregas is another Blues’ player that should be able to deliver assists on regular basis. He should be priced a bit lower than Hazard so he’s a more budget friendly option if you can’t fit Eden in your FPL team. Nemanja Matic is interesting option in the Chelsea midfield. You can’t count on him to deliver goals and assist like Eden or Cesc but he is indispensable for the Blues. His energy, strength and ball winning capabilities make him a regular in the first eleven, but unfortunately that does not translate much in Premier League fantasy points. He’s much more affordable than Eden and Cesc and he’ll probably rack up more fantasy points than the likes of Willian, Oscar, Ramires and Cuadrado which makes him an interesting backup midfielder who is likely to have almost 3 points-per-game average.

Attackers – Diego Costa is certainly an interesting option to own as your FPL team high profile forward. He did well last season, scoring goals for Chelsea very often. His downside on the other hand is his mentality which leads him to earn a lot of yellows and reds that takes away your fantasy points. He is also injury prone which can be a bit of a problem for his potential owners. Still I would say fixture list for Chelsea in August looks good enough for him to score at least 3 goals in opening 4 rounds so he’ll be a player that I will consider adding to my team right on the start. Potential arrival of Radamel Falcao shouldn’t hurt his fantasy value. On the other hand if Falcao does join Chelsea, others like Drogba nad Remy will likely be devoid of any fantasy value. What to expect from Falcao after a rather disappointing season at Manchester United is yet to be seen though.

At this point, a month before the season actually starts, I would be interested into drafting Diego Costa as one of my 3 forwards and Eden Hazard as a midfielder. There is always Fabregas as a bit cheaper option than Hazard and if price is right even Nemanja Matic could be considered for a spot in your initial Premier League fantasy team as he’s likely starter so it can be used on the bench just as a safety measure in case one of your first option midfielders doesn’t start. That can very well happen in the beginning of the season while teams are not warmed up and managers trying to figure out their best combinations on the pitch. So those are the players I would recommend as my fantasy football scout tips. What do you think? Who is a good fantasy team prospect from the Blues? I would like to hear from you so please comment below.