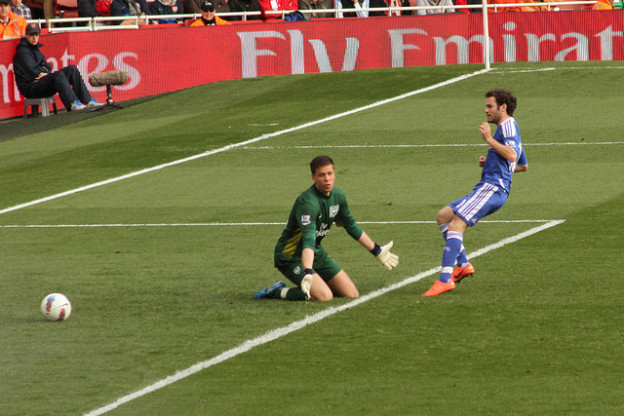 In this early FPL tips article let’s focus on what offer Man Utd players in terms of fantasy football value. This team had a somewhat roller coaster ride last season and we just might see them more stable this season though with Louis van Gaal more accustomed to the ways of Barclay’s Premier League football. How can that translate in fantasy value is the topic of this article.

Let’s examine first 4 matches that United plays in the new Premier League season. They play against Spurs at Old Trafford in gameweek 1. This is a decent opportunity to start the season strong. Tottenham leaked goals heavily last season as they conceded total of 53 goals which was topped buy only 4 other teams. It is hard to expect them to become a much improved defensive team so it is fair to expect Man Utd scores couple at home. At the other hand their defense despite conceding considerably less goals than Spurs’ didn’t look good often which was in big part due to the constant rotations and injuries in Man Utd squad. It is likely Spurs will score as well especially with arguably most improved player in Harry Kane to spearhead their attack. Gameweek 2 is unusual Friday match for Man Utd as they visit Aston Villa at Villa Park. This one is another opportunity to get all of the points for van Gaal’s boys as Villa doesn’t care much for the defence under Tim Sherwood. If they don’t sell Benteke however, they should be able to score as well against Man Utd. In the third Premier League gameweek Red Devils welcome Newcastle which is another good opportunity for a win but this time they should be able to keep a clean sheet as well. Man Utd rounds up August fixtures when they visit Swansea on August, 30. This one should be entertaining as Swansea likes to play attractive football. Basically in any of first 4 matches Man Utd plays we should expect them to score a couple which makes them attractive source of attacking players to choose. On the other hand one of our FPL tips regarding Man Utd won’t be to pick their defenders, not early in the season at least.

Man Utd FPL tips – players to consider for your team

Goalkeepers – De Gea is priced £0.5m less than we expected despite having a solid season. He is available for you at £5.5m but considering no GK is actually valued more than £5.5m you might want to look elsewhere. Because of a bit unfavorable first 4 matches De Gea can be overlooked in the beginning of the season. Valdes is a cheaper option if you want to own a Man Utd goalkeeper but he’s hardly going to be favoured over De Gea which doesn’t make him a smart choice.

Defenders – This is the area of the pitch that will likely see plenty of changes in starters over the season. Shaw is pretty much safe at left back position but he has been a let-down so far. This just might be his season, but until we see him proving it in action he won’t be on our radar. Judging by the current first day ownership % it seems other FPL managers share that opinion. Smalling is highest priced Man Utd defender at £6.0m but is he guaranteed to start in every match when available? If you’re looking to spend that kind of money for a defender you might want to consider e.g. Arsenal’s Koscienly instead.

Midfielders – Mata looks like a interesting midfielder option from Man Utd. He will likely play high up the pitch with Rooney as United lacks numbers in attack at this point. At £8.5m he looks like a good pick as he can score and assist other players. With more attention from other FPL managers going towards newly signed Memphis Depay at the same price, Mata just might be the way to go. Depay is expected to do well at Man Utd. He is the player van Gaal likes and knows good. He is fast and talented but we are yet to see if he is going to adapt to Premier League fast and as good as expected. Angel Di Maria is yet another offensive midfielder available at £8.5m in Man Utd team with a lot of talent and FPL potential. He is currently being assessed though, and is questionable at this point to start the season. It is still early though, but if he is not completely fit to start the season, we would advise you to look elsewhere. Herrera will play behind the likes of above three mentioned players but that doesn’t mean he won’t pick up assists and goals on fairly regular basis. At £7.0m he is more budget friendly and definitely has decent FPL potential. Blind is even cheaper at £5.5m but he has very little fantasy value regardless. This is the player that will cover defensive positions if necessary and as a midfielder that will help his defenders more than attackers he is not a good FPL option. He will score a goal every once in a while but that shouldn’t be enough to make him appealing choice. Januzaj probably won’t have a breakthrough season just yet and at £5.5m purchase price isn’t particularly good choice. Fellaini is expected to have less playing time than last season so at £6.5m is also not worth considering.

Forwards – With van Persie likely traded out of the team, Wayne Rooney is the only option Man Utd has at this point which makes him very valuable fantasy football player. He is available at £10.5m which won’t be that steep if van Gaal doesn’t sign a big name alongside him. He declined as a footballer in the last couple of season, but he is still a player that can score goals regularly. Wilson might be an interesting option at just £5.0m but it remains to be seen if he’ll get enough opportunities to show himself.

Due to the lot of uncertainties and lack of true talent we wouldn’t recommend taking Man Utd defender as one of our FPL tips but De Gea looked good last season and he could be considered for a goalkeeper position in your fantasy team. On the other hand Manchester United offers more interesting options in the midfield area of the pitch. Mata, Di Maria, Herrera and newly signed Depay are very interesting options. We would at this point recommend Mata as Depay is unproven and Di Maria a bit injured and tipped to miss opening match(es). Herrera is considerably cheaper option though, which makes him appealing as well as your potential FPL player pick. Rooney will likely rack up a lot of points as a Man Utd forward and is appealing enough at £10.5m. What do you think? Who is a good fantasy team prospect from the Man Utd squad? We would like to hear from you so please comment below.