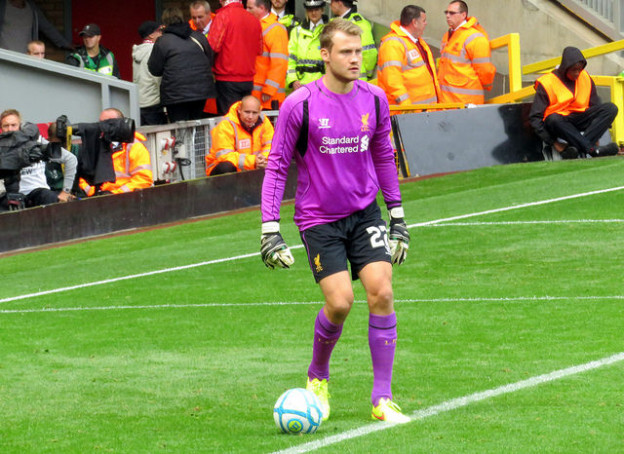 Of all FPL goalkeepers I chose Mignolet as my first option at GK position in my FPL draft number 1. In this article I will explain why and order other goalkeepers in terms of projected fantasy value. Surprisingly this season we don’t have any goalkeepers to choose priced at £6.0m or higher. Most expensive fantasy Premier League goalkeepers are Cech (Arsenal), Courtois (Chelsea), Hart (Man City) and de Gea (Man Utd). All of them are available at £5.5m which actually means all of them have value what makes any of them a good pick for your FPL team. However I went for a cheaper option with Mignolet at £5.0m. He was second best goalkeeper in last FPL season in terms of points won finishing just two FPL points behind Fabianski from Swansea. Keep in mind Liverpool had a very frustrating and turbulent season but Mignolet still managed 14 clean sheets which is best record joint with Joe Hart. Liverpool brought too many fresh faces into the team to compensate the loss of amazing player like Suarez and it didn’t work. Their defence looked funny at times and that didn’t help Mignolet at all. Lovren was supposed to be a big improvement at the CB position but he failed to make an impact to say the least. Even Can was introduced later in the season as a third CB. It looked for a long time like Brendan Rodgers didn’t know what to do. Hopefully he figured it out for this season and I expect Liverpool to start new campaign stronger. In that regards Mignolet should be a good choice for a goalkeeper at £5.0m.

Notes:
* Brad Guzan looks like a first choice keeper for Aston Villa with Shay Given signed for Stoke City, but there is a chance that Tim Sherwood will transfer in another goalkeeper for a starting job.

** Maarten Stekelenburg will likely be a first choice until Fraser Forster returns from injury. That won’t be anytime soon though.

*** Boaz Myhill – just like in case of Southampton, Myhill will start until Foster returns

Mignolet has more value for sure than these £5.0m goalkeepers: Szczesny and Ospina (Arsenal), Caballero (Man City) and Valdes (Man Utd) because at this point neither of them is a first choice goalkeeper in their respective teams. Howard and especially Lloris are good £5.0m goalkeepers on the other hand but their defenses were really bad last season which resulted in more than 50 Premier League goals conceded each. Fraser Forster (Southampton) is an excellent goalkeeper but unfortunately he is expected to remain on the sidelines at least until the end of the year which means he has no fantasy value at the beginning at all. Koeman brought in Stekelenburg on loan as a replacement for him but with Southampton’s defense looking considerably weaker now with departures of Clyne and Alderweireld he looks like a risky pick at this point. Begovic joined Chelsea as a backup to Courtois and lost all of the FPl value. Jack Butland is the first option at Stoke and priced at £4.5m has some FPL value. Pantilimon had a decent season and he might be a good choice for your fantasy goalkeeper but his defence looks shaky and somewhat old and he has a good backup actually in Vito Mannone. Mannone was a first choice GK for Sunderland until he went in some sort of a form crisis and lost his position to Pantilimon, but he’ll be ready to jump in if similar dip in form should happen to Costel. Another £5.0m FPL goalkeeper is Adrian (West Ham). Sam Allardyce was the manager last season at West Ham and his defensive mentality certainly played a part in a very good season for Adrian. He shared 3rd place with Joe Hart in FPL points won with 142 and although he is likely to have a good season again I am willing to wait and see some preseason West Ham matches to get a better picture of what to expect from Bilic’s West Ham in the season to come.

Fabianski and Foster were my two goalkeepers from the beginning of the last season. I am especially proud for picking Fabianski as he was in fact highest scoring fantasy goalkeeper with 151 points in total. This season I decided to overlook him for now as it might be hard for him and Swansea team overall to replicate the last season’s form. Without Bony they will find it harder to score goals and that could affect the team generally. Foster scored 98 FPL points, but he had significantly less minutes on the pitch than any of the goalkeepers that outranked him. He is injured at this point and expected to miss at least first two months of the season which means there is no point in picking him until he gets back to the lineup.

There are plenty of £4.5m FPL goalkeepers out there but very few of them are worth considering as not many of them are going to get a lot of playing time on the pitch. From this group following goalkeepers are on my shortlist: Boruc (Bournemouth), Schmeichel (Leicester) and Krul (Newcastle). Boruc is the one that is in my team at this point. He didn’t get any playing time last season at Southampton so I feel he will be really motivated. He had amazing Fraser Forster to compete for the place in the starting eleven but he should be a first choice goalkeeper at Bournemouth. He is a good goalkeeper who had a pretty good season 2013/2014. Schmeichel is a good £4.5m FPL goalkeeper as well but I feel Boruc is more talented. Krul is another good option at this price but what put me off from taking him at this point is the fact that Newcastle’s defense looks weak on paper. I am not saying Bournemouth has the better defense but them being a newly promoted side, my hope is they will overperfom a bit. Other £4.5m FPL goalkeepers that will get enough playing time are Speroni (Crystal Palace), Ruddy (Norwich) and Gomes (Watford). At this point situation is not clear in Aston Villa when it comes for goalkeepers. Guzan fell out of favor when Sherwood was appointed as manager. Given took his place but now he signed for Stoke as a backup to Butland. Finally, it is worth mentioning Myhill (WBA) who is a £4.5m FPL goalkeeper that has some value considering WBA is a disciplined unit under Tony Pulis. Foster will return at one point between the sticks however, so I am not very interested in drafting Myhill to my FPL team.

I would like nothing more than to pick a £4.0m fantasy goalkeeper alongside Mignolet but unfortunately that would be a waste of budget as neither of them is a worthwhile pick. There are 4 goalkeepers priced at £4.0m: Hennessey (Crystal Palace), Hamer (Leicester), Elliot (Newcastle), Rudd (Norwich) and all of them are considered a second choice at this point in their respective teams. However it is worth mentioning that neither of them sucks, so they should be worth considering if they get the chance to play for a bigger period of time.

Following table is a list of goalkeepers ordered by fantasy Premier League value that they have in our eyes. List is made in regards of total points we at FSi expect they will win throughout the season. Note that some of them are placed a bit higher (e.g. Stekelenburg – because despite not being a first choice for his team he will likely get a lot of playing time before first wildcard deadline) and some of them are placed a bit lower (e.g. Myhill, as despite he’ll likely start the season, Foster should return in October to claim his starting position).