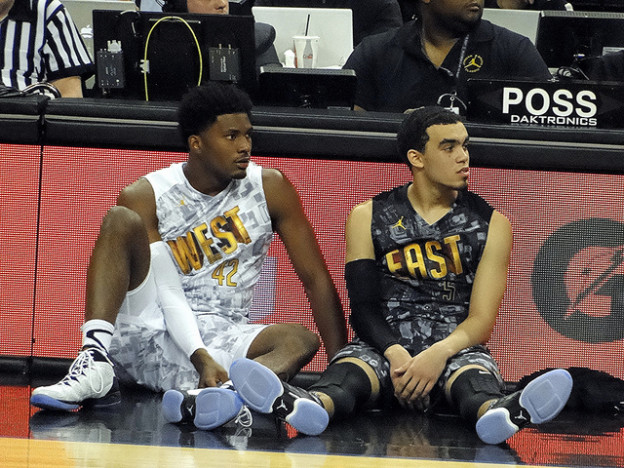 We’ve already examined what NBA draftees 2015 can bring to your fantasy team and now after 2015 NBA Summer League performances we can deliver you an early scout report. This is what impression first 10 NBA draft picks left during the Summer League.

The first pick of the 2015 NBA draft was expected as football on the sports channel. By picking Towns, Timberwolves have a tremendous foundation in him and Wiggins.
As for Towns, considering that he shoots free throws over 80%, and that he inserted three-pointers in his attacks, there is no doubt that he would be excellent option from mid range, and maybe reliable three point shooter. In addition to being able to move like a great roller, Towns in the situations where he can remain on the perimeter as a spot-up shooter, brings added value in extracting not only forwards from their positions, but centers as well.
Towns is defensively so good, than he can spend most of his career playing center position, (especially if the competition on position five remains as is) and by playing like that, he can open the space on the floor by removing best opposition blocker ether from the rim or out of the game entirely.
In conclusion, Towns brings what every real and modern tall player brings, protection of the rim and control of the rebound. Attacking aspect of his game, depends only on him – could he be new Rasheed Wallace, something modest or he will settle as a secondary option? We will find out in a couple of years.

Defining moment of the latest NBA draft. There could be everything here, but the Kupchack showed that he had a basketball brain. He drafted D’Angelo as a Kobe heir (today it seems like that, don’t ask if he got traded to Kings later) and by drafting him, he made a great deal. Okafor doesn’t have such an upside, and it also shows that Lakers are getting out of Stone age. Instead of center, which wouldn’t fit very well with a last year lottery pick (J. Randle), they took a kid who seems like a prototype of a modern basketball player.
Probably the best backcourt player in the draft, tremendous size for his position, great confidence and high basketball IQ. He is more of a scorer than a shooter, his shooting needs to get better. Athletic enough to run a NBA team from day one.

While there would be a problem fitting in Okafor with Randle in the Lakers, with Noel and Embiid (he probably won’t play again this season) he makes a solid fit. With Noel there is a same problem what would have with the Lakers, neither of them don’t have a range, but they can function defensively – while Randle and Okafor aren’t mobile rim protectors, Noel can „hide“ in defense almost everybody. Embiid faceup game would enable Okafor to operate in open space, so from this perspective this wasn’t a bad pick. It’s not ideal, but in the end, Hinkie (Sixers GM) doesn’t see anybody more than an asset which he can replace with a another toy, whom he likes more tomorrow .
During an NBA Summer League, Okafor went down from the outstanding scorer (in the NCAA) to NBA role player (only 44 % FG) in the clashes with more adult competition, in the way receiving more blocks by trying to finish at the rim through crowd (it all culminated when Porzingis made a few blocks in their clash). Shots he made were mostly from the contact, free throws were horrible. He would definitively need system with 4 out + 1 in so he could have a role in the future (good luck with that next season, by Noel and without solid 3 pointer on the team).

After the Lakers, second moment of the NBA Draft night. Before the draft, bunch of questions hung in the air;  what direction will Phil Jackson take the Knicks, will there be trade, will they take a guard… in the end, just like the real drama, Knicks pick Porzingis,  so the whole arena started to whistle. What draft it would be if the Knicks crowd doesn’t react negative on their pick ?!
A new Bargnani? Useful player? We won’t know for couple of years. We do know something, Porzingis will, if he stays in New York, have a lot of chance to shoot after running from the block or pick & pop, he just needs to have plays designed for him, like Fisher did for the Jason Smith last year.
During Summer League, Porzingis proved that he got game. Of course, he needs to get tougher so he could score in the post or under the rim and to grab some rebounds. His skills everybody talked about before the NBA draft are absolutely real, Porzingis has a soft hand and a range to shoot three’s. Also, he proved that he could become solid block player (solid as a rim protector, showed that he has instincts to help, rotate regulary and a block player from the behind). In a couple of years, when he solves a weight and muscles problem, he would become everything Bargnani never managed (he is now too thin, it’s to easy to push him from the position, so he is now only a shooter, can’t use his height in the attack).

Magic had a place for swingman, especially for the swingman who can shoot and the pick for Hezonja was logic one. Only, Oladipo is cemented as a two guard, so it means Hezonja will spend more time playing small forward position, what isn’t ideal situation for him, because it diminishes all the advantages which comes with physical attributes he owns.
Shooting, drives, athleticism – it isn’t questionable, his numbers in Europe shows, despite bad contest he showed more than good games. But, some things pop out. Example: if he had played more than 40 minutes in Barcelona, he would average less than 3 free throws, one steal and half block per game. It shows that Hezonja hasn’t been active in defense. Can his arrival in the NBA wake up a desire to play two way, not only in attack , or his mentality remain a problem? It seems to be only doubt, because he can fill in the buckets from day one without a problem.
In the 2015 NBA Summer League, Magic tried him as a spot – up shooter where he showed that he has range. As mentioned, range and physical attributes are NBA ready, everything else is a problem that needs him to work on.

Picking Willie this high doesn’t have much sense even if Kings trade Cousins, in the situation where you can pick a star prospect like Mudiay or Winslow (both of them would fit in Karl system) wasting your pick on a garbage man that can’t shoot isn’t very smart.
Cauley–Stein isn’t a bad player, he is a very good runner, he can defend any position on the court, but that all isn’t very special. Even if Willie becomes a solid starter and if all the panic about his feet and ankles turns out to be just a smoke, a player with his skill set just isn’t ideal fit for the Kings.
What value does his defense have when he is a completely zero on the other side of the court. In general, like a role player he has a future, and if he evolves something like mid range shot, he can be something like Kenyon Martin in the NBA league.

Nuggets found excellent replacement for the Ty Lawson by picking Mudiay.  Very good handles, enters in middle with ease, ready to help in all aspects of the game from day one. Playing in the 2015 NBA Summer League, Mudiay thrilled all the scouts. His physical attributes,  especially playing a guard position are extraordinary, and also he is a real play-maker. Truth to be told, his poor shooting could get him in trouble, as exaggeration with drive ins (more than once he would get in the crowd, jump in the air with the ball, and only than look what to do). His ball control in the transition, slash & kick game are on the NBA level, and the thing he won everybody is his unselfishness and “hockey” assists.
On the other hand he will need to put much work on improving his shooting. Considering the quality he brings like a play-maker and defensive option on the perimeter, there is no doubt we will be a very good NBA player.

Old school move by Pistons, they needed a three, they took a three. Similar player to Winslow, there is no chance that he becomes major flop. Prospect without risk, in worst case scenario he will become solid 3&D option.
In the Summer league, Johnson stood out as an absolute first name of the Pistons, best rebounder, best scorer and defensive player, plus, whenever he wanted, he got himself on the free throw line. In general, he was so good in the summer league, it seems like he was generation ahead of the competition.

By bringing in Batum and Lamb there wasn’t need to pick a guard, so Hornets could ignore Booker with which they connected during the year. They skipped Winslow, but they clearly got the player they wanted at first place.

Kaminsky is a little slower and less productive version of Porzingis with the combination of shooting and height. He would hardly be the ninth best player of these draft generation because in the NBA he won’t be centrepiece of his team, like in the Wisconsin, where everything evolved around him. He won’t play in the post every second possession (like in college),  so it’s clear for him to find a role on the next level (NBA).
If he finds it, there is no reason he wouldn’t be useful player as he was in NCAA. Main reason he was drafted this high is because his numbers were so good and with good reason he was selected as a best NCAA player in 2015.

I have no idea how Justise end up this low, but I do know that Riley and Miami Heat are unbelievable lucky. They got one of the best players that 2015 NBA draft offered. Winslow can help his team from the first day, he can defend positions from 1 to 3, hit the open shot and attack the rim. If he brings his spot-up accuracy in the NBA, and if he learns to shot from the dribbling,  he could become a new Jimmy Butler, worker who became a star.
For now, his skill sets are enough for him to have a solid NBA career.

This was our NBA draftees 2015 Summer League scout report. Hope you enjoyed it and you found it useful. If you like it please share and comment below.