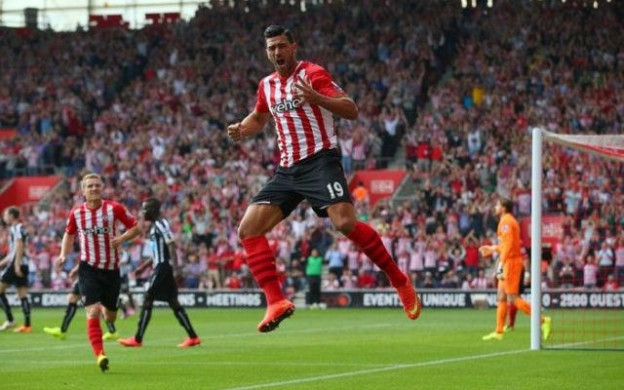 In this FPL article we examine top 10 FPL forwards that are available for £7.0m or more. List is formed based on Fantasy Sports info predicted score each player will get in the following 3 Premier League game weeks combined with a purchase price. This FPL forwards list will be updated after each gameweek to ensure you can make an informed FPL decision before each round.

Rooney is having a very disappointing season. 2 goals and an assist so far is way below expectations. However, he did score both of his goals in last three matches, which could mean his form is going up. It looks like he enjoys playing alongside young Martial instead of leading the line on his own.

Fantasy Sports info FPL tip: Rooney can score goals and assist to his team mates but with a price of £10.2m, uninspiring season behind him and the same start to the new BPL season, he is dead last on our top 10 FPL forwards list. Nevertheless, he does have a chance of scoring in next three matches. Huge derby at home against City is their next game, so Rooney is expected to lead his team.

Giroud is a good scorer but he doesn’t do much else. He returned a single FPL bonus point so far despite 4 goals on his tally. He even lost his starting job to Theo Walcott as he was introduced from the bench in all of his last 6 appearances. His FPL price dropped to £8.7m and simultaneously he dropped from position 7 on our own top 10 forwards list for GW 10.

Fantasy Sports info FPL tip: Arsenal has two home games until GW 12, and both of them are winnable. First they play Everton in GW10 and then Tottenham in GW12. In between is sandwiched Swansea (A). Giroud could score in all of these games, but if he should continue coming in from the bench, he doesn’t really have much fantasy appeal.

Harry Kane had a fantastic season and he was a must own player in the second part of the last season. He is now priced at £9.2m which means he lost £0.3m of value from the start of the new Premier League season. He scored only one goal so far. However, his next two fixtures are very promising.

Fantasy Sports info FPL tip:Bournemouth (A) and Aston Villa (H) are very good opportunities for Kane to deliver. His price could go further down until GW10, so keep an eye on him.

Anthony Martial started his Man Utd career with a bang, but has cooled off a bit since then. I still consider him a better pick than his partner in attack, Wayne Rooney. He is much cheaper, for one thing. However, at the same price range you could find better options for the next three gameweeks. This is why Martial is placed on the 7th place of this top 10 FPL forwards list for GW10.

Fantasy Sports info FPL tip:Two home games for Martial in next three FPL gameweeks is a good chance for him to get on the score sheet. However do consider GW 10 opponent is Manchester City. Is this youngster up for it?

Gomis is 6th on our list. He dropped from 4th place because he failed to score in all of his last four matches. I am interested to see him perform against Stoke in the last match of the GW9, and I could reconsider his position accordingly.

Fantasy Sports info FPL tip: Swansea plays against Aston Villa and Norwich in the following 3 matches and he could be considered as a decent mid-priced forward option depending on his performance against Stoke.

Bony went straight up to position 5 on my top 10 FPL forwards list following a nice performance against Bournemouth in GW9. He scored two goals with an assist and grabbed 3 bonus points in the process. Plenty of FPL managers will rush to get him in now, but two things are not going in his favour. Next game is Man Utd (A) and it could be a tricky one. More difficult than Bournemouth (H) that’s for sure. Other problem is his long term value. He will lose his place when Aguero returns. That could happen in GW13, so if you decide to buy Bony you could do it for GW11 and GW12.

Fantasy Sports info FPL tip: City plays Norwich (H) and Aston Villa (A) in GW 11 and GW12 respectively. These two matches are good chances for Bony to score. However getting him in right now for GW10 might be risky. Because he is not first choice in his team, there is not much point in picking him unless Aguero doesn’t gets further injury setback. He is 5th on my list because of his short term potential, but players on the list below have much more long term FPL value.

Lukaku had a very frustrating FPL season last year with just 10 goals scored. His place as an Everton forward is safe and he should score a couple of more in this Premier League season. He looks to be in much better form with 5 goals and two assists so far. However his main problem is consistency. Because of it, it is tricky to predict when he will deliver which makes him unpopular FPL captain choice.

Fantasy Sports info FPL tip: Available at 8.4m Lukaku is a good bargain for your FPL forward. He is strong and has plenty of talent. Already looking better than last season and he could be one of the best goal scorers in this one. Next match is Arsenal (A), which should be a very tricky one. After that next two matches are much easier for Lukaku. In fact after FPL GW10. Everton faces a top Premier League side in gameweek 21 when they travel to play against Man City. This is huge span of 10 rounds of very favourable matches. Because of it, his price should rise as well as his ranking on this top FPL forwards list.

Pelle proved to be a very good signing for Southampton last season and in his sophomore year he shouldn’t disappoint. He already scored 5 goals and assisted 5 more, which is a very good record. However he disappointed a bit by blanking against Leicester at home in GW 9. Next match should be difficult one. Southampton plays against Liverpool at Anfield, but two matches after that are easier.

Fantasy Sports info FPL tip: I placed Pelle higher than Lukaku on this list as I believe he will return more FPL points in next three game weeks. He is also a bit cheaper. However if you are looking for a solution in the longer term, Lukaku does have better fixtures on paper until gameweek 21.

Costa returned 12 points in GW9 following a two game suspension. I expected him to perform well as Chelsea had an easy opponent in Aston Villa. This is why he was my free transfer to replace Aguero. But I picked him because I do believe he has more goals in him and next three gameweeks look decent, despite two away matches. Home game in between is a derby against Liverpool and Chelsea should be very motivated in that one. Costa has a lot of potential and he has relatively low ownership. He should be one of the best FPL forwards while Aguero is injured.

Fantasy Sports info FPL tip:Chelsea has been in a horrible for so far, but Costa could feel good about himself following his performance in last match. He will have his chances to score in the following gameweeks. He should also see his FPL price rise soon, so you should get him in as soon as possible.

Vardy just keeps on scoring. I really didn’t expect him to score two against Southampton away, but he did. He leads the Premiership in goals scored with 9 so far on his tally. This is pretty amazing and it makes really hard to ignore him for any longer. In fact he does have a pretty high ownership so far with 35,5%. He is available at £6.9m which is pure value, not only because of his record so far, but because Leicester has pretty nice fixture list in the following three gameweeks. Two home games against mid table opponents and an away match at WBA are all good opportunities for him to score. I expect him to return the most FPL points of all forwards, and considering he is the cheapest of them all on this list, Vardy is an absolute must have. I am certainly going to use one of my two free transfers to get him in for GW10.

Fantasy Sports info FPL tip: Vardy shouldn’t even be on this top 10 FPL forwards that are available for £7.0m or more because he is actually cheaper than that. However, his price will reach £7.0m soon. Leicester does have a nice fixture list and Vardy has to become a part of your FPL team soon enough.

This is our top 10 FPL forwards list, ranked just before GW10. Ranking is based on current form of the player, his price and potential score in the next three gameweeks. This is why this list doesn’t feature Sergio Aguero as he is injured for at least a month. Neither of Liverpool attackers is on the list as all of them are injured, expect Origi. Benteke and/or Sturridge could return for the next match, though, but at this point they are uncertain to play. How do you rate FPL forwards? Do you agree with our list? Please comment below, we would like to here form you.