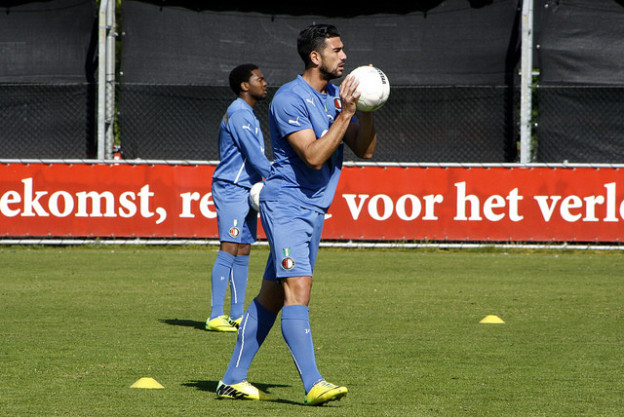 Who to captain in FPL gameweek 7? This is a difficult question considering how tough it has been to make a good captain choice this season in FPL. Plenty of high profile players have been misfiring so far, but is it the time for them to start returning FPL points? In this article I give you my top 5 GW7 FPL captain picks to consider.

Rooney didn’t know who this fellow was couple of weeks ago, but if he continues his goalscoring form in Manchester United jersey, a lot of people might forget who Rooney is. This youngster scored 3 goals in his first two appearances and he played just 116 minutes. This was not against harmless opponents. In fact Sunderland at home will be an easiest match for him so far and this is the reason I am recommending Martial as your gameweek 7 FPL captain. Sunderland has been extremely shaky in new Premier League season and they even conceded 4 goals in first half of Carling Cup match on Tuesday evening at home. They allowed 13 Premier League goals in 6 matches which is a really poor record. Man Utd should dominate this game and Martial could easily deliver again. He is owned by 17,6% of FPL managers at this point and that number will only go up by the GW7 deadline. Lot of FPL managers will choose to captain Martial and I am considering getting him if I drop Benteke as well. Depay and Mata could do well in this game also, but Martial is further up the pitch and considering his form he just might be the best FPL captain pick from Man Utd this week end.

Payet looks to be in a good form. He scored twice at home against lowly Newcastle team and returned an assist against Man City. Moses impressed as well for West Ham. He was awarded an assist against Newcastle but he was very close to scoring. He did score, however, in his last Premier League appearance. I also identified him as one of the FPL hidden gems for this Premier League season. Nevertheless, I would recommend Payet in front of him as one of my captain tips for GW 7. Payet has scoring and assisting potential and he is owned by 17,7% FPL managers which means there is a better chance you own him as well. Norwich looked like a decent team against Liverpool on Sunday, but it was more to the fact that Liverpool was actually really bad. Norwich could get exposed by West Ham that is flying high at the moment. They did lose 2 home games so far, but on paper this looks like an easy one for them. If they score a couple Payet could be involved. He looks like a decent gameweek 7 FPL captain to me.

Pelle is another striker that I am looking in to bring in my team instead of injured Benteke. He scored twice in a home loss to Man Utd. That means he scored a very respectable 4 goals in 6 matches so far. He also assisted once and considering his price is actually below starting price of £8.0m. He looks like a really nice buy at this point. At the same time he also looks like a good FPL captain choice for GW7. Southampton welcomes Swansea on Saturday. This team is not particularly famous for their defence and Southampton will definitely look to take advantage of that. Pelle could score and I consider him a good FPL GW7 captain pick.

This probably looks like a weird choice considering Leicester has a difficult fixture against Arsenal and with Mahrez being the best player so far in this team. However, Vardy scored 4 goals with one assist so far which is an excellent record. I expect Arsenal to fully concentrate on Mahrez and we might see him struggle. in that case Vardy will be the most dangerous man in Leicester City team. He could score against Arsenal’s somewhat shaky defence. Arsenal on the other hand can score as well here. They have a handful of players capable of scoring which can be a problem. Picking the right player to captain from this team could be very difficult because of it. Sanchez is the first name that comes to my mind, but it is hard for me to trust him again. He is the player capable of scoring a couple of goals against a team like Leicester, but like I mentioned before there are other guys like Ramsey, Ozil, Cazorla, Walcott and Giroud that are also capable of scoring.

For my final GW 7 FPL captain pick I am going to recommend Danny Ings. This is truly a differential captain pick considering his low ownership of 1,7%. Benteke is injured so he could get the starting job alongside Sturridge. Ings will likely get benched when Benteke recovers so he will surely try hard to earn his manager’s trust. What better chance to score than against Aston Villa. This team doesn’t seem to care much about the defence under Tim Sherwood as their manager. Sturridge is still in process of recovering and other players like Lallana or Coutinho doesn’t seem to be able to score regularly. Ings scored in his last two appearances for the Reds and I look for him to score against Villa. If you have him in your team by any chance, you could consider captaining him.

Hazard and Aguero are usually very popular FPL captain picks and considering their high ownership they should be very popular picks in gameweek 7 as well. Hazard finally looked good in a home win over Arsenal and his next match doesn’t seem to be a tough one. Newcastle did win last season at home vs Chelsea, but this team is playing really poor at the moment. I can see Hazard doing well but he was very disappointing so far overall and I would avoid him when choosing my FPL GW7 captain.

Aguero returned an assist in last round and he usually plays well against Spurs, but he was also in disappointing form overall this season and I would wait on him some more as well. All of the five FPL captain tips I provided above actually have decent fixtures ahead of them in gameweek 7 and FPL finest players have not been delivering so far. I am looking for that trend to continue in the next round so I am not going to recommend anyone of the Hazard – Aguero – Sanchez trio as a captain pick for GW7.

In this category I would also like to add Lukaku. He started the season very well and WBA game in this round looks promising considering Everton looked really good away from home so far. However, Lukaku only scored two goals so far and it was in one game. He seems to be inconsistent and as such he looks like a risky captain choice to me.

There you have it guys. I presented my top 5 FPL GW7 captain picks above and explained why high profile players should not be trusted just yet. Do you agree with any of my picks? Who did you choose to trust with an armband for the following gameweek? Please let me know in the comments below. Thanks for reading and I wish you very best of luck in the gameweek 7.