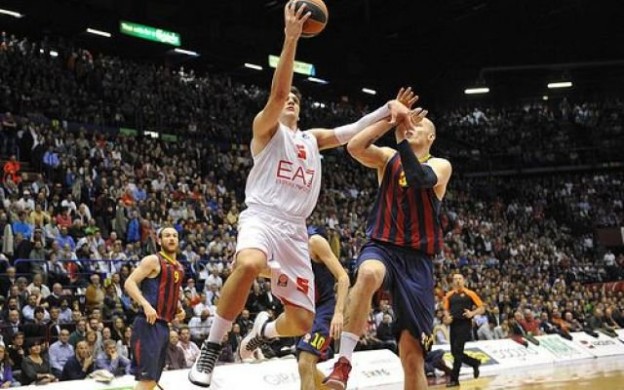 Jon Diebler: A combination between Matt Janning and Stratos Perperoglou as coach Dušan Ivković described him. A great shooter that has been the part of the Karsiyaka team that stunned the basketball world by beating both Fenerbahce and Efes in the Turkish league playoffs. Although Efes has got a lot of talent in their roster this year, Diebler could still have enough playing time to show his skills. He should fit into this team and produce good numbers which makes him a decent fantasy player.

Dario Šarić: Šarić is a player that has the working ethic and fighting spirit to go along with his amazing talent. He is a great Euroleague fantasy asset as such. He was putting great numbers last year in this team and I expect him only to progress. Only trouble is that Efes has got a lot of quality players on their front-court. Tyus, Dunston, Brown, Krstić (injured) will all be sharing minutes under the rim. Šarić spent the entire last season as a PF, the position that suits him the most IMO. On the other hand Šarić himself, said that he feels even better when playing as the SF. I don’t know if coach Ivković is planing on using him as SF in some parts of the game, but either way Šarić should get a lot of playing time. He is great rebounder, therefore he is useful when playing closer to the rim. On the other hand he can also create for himself and his team mates which makes him useful when playing outside too.

Birkan Batuk: A very “cheap” player, who could bring you some good numbers from time to time. He should be a role player on this team, but he has already showed that he could be very valuable for this team. He is a sharp shooter who has had some really good games last season, especially when his shots were serving him well. Efes played a super cup game against Pinar Karsiyaka last week and Batuk scored 18 points on that game. Not bad addition in your fantasy team for only 27 credits!

Ioannis Papapetrou: A young and very talented SF that has been having some injury problems last year, which stopped him from showing his full potential. This could be the season of his Euroleague affirmation. Olympiacos has signed a lot of new players, so he could take advantage of the fact that he has been with the team for some time now. Papapetrou will cost you only 28 credits, but he should get enough minutes for a solid performance, especially in the first round against Cedevita.

Dimitrios Agravanis: Another youngster and another player that “costs” 28 credits. He started getting some Eurolegue minutes last year and think his playing time should increase by a lot this year. Of course, he should be the backup option on the PF position while the primary option will be one of Olympiacos’ trademark players – Georgios Printezis. Agravanis has the size and and the skill to be a solid Euroleague player though, and I think he could have an important role on this team already. In the first round Agravanis will match-up with Cedevita’s PF’s who are even younger and have even less experience, so he could be increasing his price right away. This is enough to place him in my Euroleague 2015 group B fantasy tips article.

Matt Lojeski: American guard (naturalized by Belgium), is a very reliable and a rational player. He is a real team player that rarely takes wild shots, unlike some players from the USA. He is a sharp shooter that also does not hesitate to go for the dunk when driving trough the lane. He looks to be in good shape at the moment. Although his price is reasonably high at 59 credits in Euroleague Fantasy Challenge, you can’t go wrong with Lojeski.

Alessandro Gentile: The captain, the leader and the best player of this team, who should promote himself to one of the best players in Europe. He has the got the body and and the scoring skills of an NBA player and he will be impossible to stop for most defenders in the Euroleague this year. He should also have all the authorities on this team, as one of only two players that remained from the last season. Coach Repesa knows him really well as he coached him in Benetton when was just a youngster. 74 credits is not to much for a player that should be the best player of this team and on of the best in the entire Euroleague.

Robbie Hummel: Milano’s acquisition from the Minnesota Timberwolves is a “stretch 4” with an amazing shot. I’ve watched a couple of Milano’s preparation games and I can tell you that Hummel adapted to the team very fast and immediately showed that he will be a serious reinforcement for the Italian team this year. He is one of the best shooters in Europe at the moment and I expect him him to be one of the leading scorer of this team. Besides his shooting skills Hummel is a solid defender and a rebounder. Those characteristics should be getting him enough minutes with coach Repesa. Standing at 42 credits Hummel is a “must have player” if you ask me. Milano is playing at home and I expect a big contribution from him.

Krunoslav Simon: A player that is coming from a great Eurobasket performances as he was (surprisingly) by far the best Croatian player on the tournament. Simon is guard that has been playing as a SG his entire career, but his play-making abilities could be compared to Europe’s best PG. For example he was Croatia’s leader in assists, despite the fact that Roko Ukić, Rok Stipčević and Dontaye Draper were rotating on the PG position. He is also a great shooter and he was the best scorer on the national team too. His down side is athleticism and he sometimes struggles against tough, aggressive and physical defenders. Nevertheless, he should be contributing to this Milano team a lot. He is another player that coach Repesa knows very well as he coached him as Croatia’s national team coach as well as the coach of Unicaja Malaga a few seasons ago. If “Kruno” should keep his form from this summer he could be a valuable addition to your Euroleague fantasy team.

Ioannis Bourousis: Definitely one of the best fantasy buys at the start of the season, because you will be getting an Euroleague ace for only 50 credits. Bourousis just recently signed for “Baskonia”, but he is arguably the best player on this team. He is surely the best centre on the team. The other two options are Darko Planinić and Ilmane Diop and both are not at Bourousis’ level. He had his debut with the team on Sunday against Estudiantes and immediately showed that he will be one of the leaders of this team by pulling 11 rebounds and scoring 13 points which gave him 23 valorization points. An experienced player who has shown his good form on the Eurobasket with the Greek national team this summer. He looks hungry for some good basketball after being benched for most of the season with Real Madrid last year. He should be having plenty of space on this team to put big numbers on your fantasy team.

Fabien Causer: A player that has been having his best season so far last year. He would most probably made the French national team this summer if it wasn’t for his injury. He should be one of the leaders of this team as he could be considered as a senator, playing for the 4th season in Vittoria.

Kim Tillie: Laboral’s primary option on the PF position; Tornike Shengelia, got injured and is expect to be out for at least six weeks. His replacement is another Frenchmen – Kim Tillie. Tillie is a powerful PF that has the skills to play on the low post, but also likes to stretch the floor by taking a corner three pointer. He is a reliable player and you should consider him, because he should be getting a lot of playing time at the start of the season. He “weighs” only 45 credits and could increase his value while Shengelia is out.

Tomislav Zubčić: He was never one of my favourite players but Zubčić is finally showing that he has matured as player. His performances in the ABA league so far have been very good and he has been one of the most consistent players on the team. He looks to be very confident at the moment. I guess the preparation that we went trough with the Croatian national team did him good. He is hitting his three pointers at a high percentage (40.9%), but what I like the most about his game this year is the fact that he is rebounding the ball much better, therefore contributing to the team much more then he used to. He finally looks like he could have a good and a consistent season as an important part of this team. He is worth only 34 credits and if you need a little bit cheaper player, Zubčić could be a good choice.

Miro Bilan: A centre that has been with the team for some time now and is currently their top scorer and rebounder after 4 rounds of ABA league. His stats so far show that he is by far the best player of this team. The Euroleague is of course a much higher level of competition the the ABA league, but Bilan could be putting some good numbers at this level too. You can get him for 53 credits right away, but you could also consider waiting a bit, because Cedevita is playing against Olympiacos in Grecce (on Crete, because Oympiacos has been disciplined).

Nemanja Gordić: Bosnia and Herzegovina’s national team PG will cost you only 36 credits, but he should have a much bigger role on this team than his price suggests. Along with Bilan and Zubčić, he is the player that has shown the most so far in this Cedevita team. He is an experienced player who will be sharing minutes on the PG position with Jacob Pullen. Pullen, for example, is worth 51 credits, but if you look at the ABA stats so far Gordić has 69 val. points while Pullen has only 24.

Leo Westermann: Finally, to sum up this  Euroleague 2015 group B fantasy tips we present three Limoges players. First option is young PG that should be one of the leaders of this team. He had some great performances in the Euroleague last season and I expect him only to build on it this year. He should have an even bigger role on the team at the start of the season, since their American guard Randy Culpepper is injured.

Ali Traore: An experienced Euroleague centre that was also a member of the French national team. A center with great scoring skills and great technique. He brings quality and experience to this team and he should help in the Euroleague a lot.

Today we presented three players from each of the Euroleague group B teams for you to consider in your Euroleague Fantasy challenge 2015 teams. Players from group C will be presented tomorrow, so make sure you check back before the Euroleague season 2015/2016 starts. If you like or dislike our picks, please let us now in the comments below and please share if you like this article.