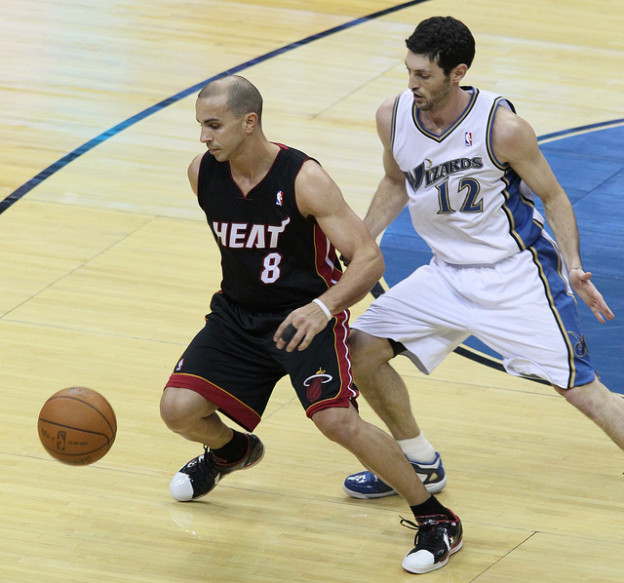 Alex Abrines: We start this article with Barcelona’s rising star. Abrines missed the chance to be in the Spanish national team this summer, but he is looking good at the start of the season. He has got the quality and he should get enough playing time to show it this year. He should be sharing his playing time with Stratos Perperoglou who is not the most consistent player around. Abrines will also not be bringing you insane numbers all the time as he is playing in a team full of top class players, but he should certainly have his bright moments. As such we feel he is a very interesting Euroleague fantasy pick.

Justin Doellman: At “only” 57 credits Doellman is a bit underestimated. He is one of the best PF’s in Europe at the moment, especially when it comes to offence. He is a player that can collect over 20 val. points any day and he is definitely worth considering for this price. He is great shooter that should be getting the most minutes on the PF position in this team. His replacement will be great Bulgarian prospect Alexandar Vezenkov. The Bulgarian is already a very good player, but not yet good enough to take Doellman’s place as the starting PF. Doellman is under priced, therefore a good choice for your EFC team.

Carlos Arroyo: There was a lot of scepticism and critics upon Arroyo’s arrival to Barcelona. Mostly because he is now 36 years old. Based on what I’ve seen form him so far I can tell you that he should be a major reinforcement for Barcelona this season. He is an improvement over Marcelinho Huertas because he possess much better scoring skills then the Brazilian guard, who is no longer a member of Barcelona. Huertas played an almost perfect pick and roll with Ante Tomić while Arroyo seems to cooperate very well with Barca’s new acquisition on the center position – Shane Lawal. Arroyo is also a leader who is not afraid to take the ball into his hands when the game is on the line. He could be Barca’s match winner while Navarro continues to struggle the past few years. Arroyo is not exactly cheap at 64 credits, but I expect him to deliver big in important games, especially away from home. Get him in your Euroleague fantasy team.

Miroslav Raduljica: PAO has got a new coach for this season. His name is Aleksandar Djordjevic and he is also the Serbian national coach. It was exactly Djordjevic who listed Raduljica on the national team roster for the 2014 world cup in Spain and made him a hit of the tournament. Under coach Djordjevic, Raduljica was one of the best Serbian players on the WC in Spain as well as at this year’s Eurobasket. I don’t see why see a reason why he shouldn’t be one of the best player for the “Greens” too. Raduljica is a classic heavy center and his game consists mostly on scoring of the pick and roll and from the low post. His purchase cost is set at 64, but honestly I don’t see that many players in the Euroleague that could say that they are better then him, if any. He should be very hard to stop for any defender in the Euroleague. Raduljica is one of the best big guys that you can get and 64 credits is not too much in any case.

Sasha Pavlovic: An experienced player with 10 NBA seasons behind him. Pavlovic costs only 37 credits and he is probably the player with the biggest difference between his price and his pedigree. Pavlovic returned to Europe two seasons ago to play for Partizan. Although it was clear that his best days are behind him it was also clear that he is still a top class player. He is player with an “NBA body”, but he is also a player with a lot of talent when it comes to shooting, driving to the basket and ball handling. He sometimes struggled when he was playing for Partizan as he was often expected to carry the team almost by himself. He clearly was not in the physical shape to be playing a lot of minutes. Now, in PAO he should have a little bit less playing time and not such a burden on his shoulders. He had some good performances during the preparation period for PAO and if he should continue to play at that level his price should go higher. Pavlovic is a top class player and although PAO has got a long roster, with this fantasy price, I consider him a steal.

Dimitris Diamantidis: I don’t want to waste words on such an Euroleague legend, so I’ll keep it short. For my last Euroleague Fantasy Challenge picks from Panathinaikos I recommend Diamantidis. I know that he has entered his veteran years and that the has slowed down a bit the past few years, especially when playing at home, but he is still the leader of this team. PAO will need his assists to take the all important first win of the season. He is a bit expensive for 69 credits, so he is not a must have, but if you have some extra credits laying around, you should consider Diamantidis.

Olivier Hanlan: Zalgiris is well known for bringing very good players from across the Atlantic. I think they made the right choice this time too. Hanlan is coming straight out of Boston College and he will need some time to adapt to European game. He already played 3 games in the Lituanian league and is starting to look better and better.

Brock Motum: Australian national team player has had the most playing time in the Lithuanian league of all Zalgiris players so far. He used his minutes very well as he has been one of the top performers for the Lituanian powerhouse. You can get him for only 46 credits, but he could be increasing his price by a lot in the first game as Zalgiris is playing Zielona Gora. By getting Motum you are getting a very good player in your Euroleague fantasy team for a relatively small price.

Lukas Lekavicius: A young Lithuanian backup play maker that should be getting about 10 minutes per game this season. He is still very young, but he also has a lot of experience already. He has one Euroleague season behind him and he also won the silver medal on the Eurobasket this summer. He is young player and he will hardly be consistent in his good performances, but he could bring you a lot of points from time to time. With the right “buy-sell” management Lekavicius could be a valuable fantasy player. His opening price is set at 34 credits.

Victor Claver:Not exactly my favorite player, but worth considering for such a small price of only 30 credits. Claver is a player with an NBA experience and it seams to me that he is a little bit underestimated by this price. He should be coming of the bench for Lokomotiv, but he should still get enough minutes to increase his value and get you some points as a very cheap player.

Chris Singleton: This is his first season in Europe and based on his performance in his first VTB league game his will be a valuable asset for Lokomotiv this season. He had 21 val. points in his first game against Astana and he is worth adding to your team for 45 credits.

Anthony Randolph: I was thinking whether to take Kyrlyo Fesenko or Randolph and finally decided to go with Randolph. Lokomotiv is playing against Panathinaikos in the first round and Fesenko could be struggling to score against Raduljica and Kuzmić, so I’m keeping him for later in case his already small price should drop even further. Randolph stands at 61 credits and he is also not that cheap, but he is such a greet player that has the potential to be one of the best among the PF’s an C’s in this year’s Euroleague Fantasy Challenge. Randolph is an athletic PF that can shoot,rebound,block, run the floor, play defense… Anything you need.

Juan Palacios: A Colombian PF-C who came to Europe after 4 years of Louisville college. He was one of the survivors on this team, after big teams have taken a lot of Karsiyaka players from last season. He is a mobile, but powerful big guy that can also shoot from distance. He is a good rebounder that also does a lot of dirty work for his team and I see him being one of the leaders once again this year. Palacios does not have a lot of Eurloeague experience, but the last time he played in this competition (with Lietuvos Rytas), he was one of the best players on the team and he had some really good performances. A good choice for 51 credits.

Kenny Gabriel: Another player that remained with the team after last year’s amazing season. Gabriel is the same height as Palacios, but with a lot less muscle. He is also a great rebounder and a very athletic player. Gabriel should have a bigger role on this team than his price is suggesting. You can get Gabriel in your Euroleague Fantasy Challenge team for only 45 credits.

Josh Carter: I remember Carter when he played for Montepaschi Siena in their last Euroleague season. He was a very good shooter. I think that he could replace Jon Diebler (who went to Anadolu Efes) perfectly. You can get him for only 47 credits, but he could end up being one of the key players of this team. Caoch Sarica likes good shooters and Josh Carter falls into that category.

Mateusz Ponitka: One of the most talented young players in the Euroleague this season. He played an important role on the Polish national team this summer on the Eurobasket. Ponitka is an athletic SF, that has averaged 27.5 val. points in two games Zielona Gora played this season. A young player with probably the most talent on the team a a desire to prove himself in the Euroleague. He will cost you 50 credits, but I think his limits are much higher.

Demarquis Bost: A very good American PG, with enough European experience to be one of the best players of this team. He is good a passer and a scorer, but he also has fast hands which makes him a good stealer. He will be sharing his playing time with Lukasz Koszarek, who has not been performing all that well in the Polish championship so far. Zielona Gora is playing their first game at home and Bost has a chance to raise his price that now stands at 47 credits.

Przemyslaw Zamojski: For only 39 credits you will be getting an experienced player who was performing very well in Zielona Gora’s last Eurolegue appearance. The Polish team was playing very good back them, especially at home and Zamojski was one of their best players.

Today it was time to present three players from each of the Euroleague group C teams for your Euroleague Fantasy Challenge 2015 teams. We will finish this series of articles tomorrow when players from group D will be presented, so make sure you check back before in time for the new Euroleague season starts. If you like or dislike our picks, please let us now in the comments below and please share if you like this article.