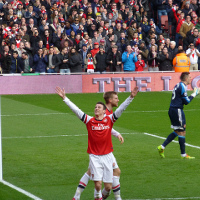 Fantasy Premier League game week 12 is approaching so it is time to lay out some tips to help you get a value player with your FT. This is a list of players to consider as we expect them to deliver FPL points in GW12. Depending on your needs, we divided this article by positions. Let’s start with goalkeeper and defender Fantasy Premier League tips.

Schmeichel (Leicester) is not a popular goalkeeper choice as his team conceded in all but one match so far. However, Watford (H) is a good opportunity to keep a clean sheet. That means Kasper has some value, but only short term as his fixtures starting GW 14 up to GW 20 look really ugly. Having said that, you should be better off focusing on Simpson as a very cheap defender option. He will cost you only £3.9m at this point which means you’ll free some cash to strengthen your midfielder or forward area. After next two game weeks keep him on the bench. He is a great 5th defender as you won’t find a cheaper option, especially not among starters.

Manchester United kept three Premier League clean sheets in a row which makes De Gea a very nice goalkeeper choice in the long run. He has appeal for GW12 as well, considering United plays WBA (H). Rojo looked really solid in their defence and he is emerging as great value at £5.4m. Smalling is a safer option, but his price is much higher. You could even consider Jones for GW12, but he looks to be injury prone and that is not a good FPL quality.

Everton doesn’t have a good fixture in GW12 if you are looking for goalkeepers and defenders that are going to keep a clean sheet. Nevertheless, taking a reliable goalkeeper like Howard at £5.1m does make sense in the long run. If you want Everton defensive coverage he should be your guy as defenders do not really come cheap in this team.

Following a successful UCL match, Man City is expected to play well in BPL GW12. They also have a good chance to keep a clean sheet as they travel to face lowly Aston Villa. Hart (GK), Sagna and Kompany are all good picks. Kompany is more expensive than Kolarov, but it seems that Serbian player dropped his form a bit and £0.2m of difference seems worth it if you got enough ITB.

Arsenal is expected to win against their local rivals Tottenham, but they have a tough UCL match midweek. Still, having some defensive coverage from this team is a must lately. Cech is an excellent goalkeeper choice. Koscielny scored two in a row and he is definitely worth considering for a defender. Especially while Bellerin is questionable to play in GW12.

Finally, to round up this Fantasy Premier League goalkeepers and defenders tips for GW12 section I would suggest two Liverpool players. Clyne and Moreno are both excellent choices. Both have high job security. Clyne has always been a first choice player at right back while Moreno became one when Gomez got injured. Moreno is a cheaper option, but Clyne looked really good lately. They should keep a clean sheet against Crystal Palace, but there is a chance they will contribute in offense with the assist as well. GW13 is a difficult game at man City for them, but after that there is a kind set of fixtures for Liverpool again.

Bournemouth has looked really poor lately but to be fair they are suffering from a lot of injuries. However, they did show some fighting spirit against Southampton and their next game is against Newcastle at home. This team is having an injury crisis on their own. They have to play their 4th choice goalkeeper on Saturday. That could be a nice opportunity to get mid-priced midfielder like Matt Ritchie from Bournemouth as a differential FPL pick for GW12. On the other side, there is Wijnaldum looking to break his two match goal drought.

There is no need to stress out how essential Mahrez is in FPL this season. This guy just keeps on scoring. He wasn’t a popular captain pick last round as Leicester had the fairly difficult match on paper and yet he went on to score twice. Not owning him will hurt you a lot as he is owned by more than half of FP managers out there.

Andre Ayew has been very consistent this season. Next two fixtures (Norwich and Bournemouth) look very promising. He is definitely worth considering for £7.1m.

Yann M’Vila is a very cheap midfielder, but he looks like the best pick from Sunderland midfield. Allardyce should be able to motivate his team after they conceded 6 goals and M’Vila could assist or score. Southampton will play without their important holding midfielder Wanyama and Fonte who is questionable at this point. If Yoshida steps into defence Sunderland could have their chances so M’Vila could be a sneaky pick for GW12, but he also has some value as your 5th midfielder in the long run. On the other hand, Steven Davis from Southampton will cost you even less. He is available at £4.8m. What makes him an interesting player to own is the fact he was employed just behind Pelle lately and he scored two goals so far, the last one coming against Bournemouth in gameweek 11. However, he will likely play deeper against Sunderland with Wanyama suspended but Davis has a lot of value as the 5th midfielder as well. You can also go for Mane if you can afford him. He was very active lately and despite not scoring, he looks like  good mid-priced midfielder.

Payet is the usual suspect from West Ham team when it comes to returning FPL points and my final midfielder for Fantasy Premier League GW12 tips. This will be the case again when Everton comes to town. If you still don’t own him, now is as good time as any. On the other hand, Everton has a kind set of fixtures in the long run so taking Barkley could also make some sense. He was active in a win over Sunderland, but owners feel disappointed by the fact he returned only two points. However I still consider him the best Everton midfielder, despite a great game by Deulofeu.

Vardy just keeps on scoring. This guy doesn’t seem to be slowing down and Watford (H) is a great opportunity to score again. He is already recognized by 50% of FPL managers so there is a good chance you already have him too.

Pelle looked sharp in a win over Bournemouth. Sunderland (A) should be a good opportunity for him to score again. Get him in.

Lukaku returned 2 assists and a goal in a high win over Sunderland, but with some luck it could have been more for Belgian attacker. Everton looked good counter attacking this season and I wouldn’t write him off against West Ham. I already mentioned twice how appealing Everton fixtures look at this point and Lukaku is almost a must-own player. Kone actually outscored him in the last round, but it shouldn’t be the case on Saturday.

Bony was a popular pick after Aguero got injured, but he didn’t return anything in his last two matches. GW12 is a good opportunity though and I expect him to play well against Aston Villa. I didn’t recommend any of Man City midfielders as there are a lot of options, but Bony will likely play alone up front and he likes to play when opponents give him space. He could get plenty against Villa as I don’t expect hosts to park the bus in front of their fans.

Giroud scored in three consecutive matches and he is a great pick while Walcott is out of the picture. Arsenal always raises their game when playing at home against Spurs and Sunday match shouldn’t be an exception.

Finally, I would like to recommend Benteke to conclude Fantasy Premier League GW12 tips. This powerful Belgian scored two in a row for Liverpool and is expected to finally start as he should be at full fitness now. Crystal Palace is not the team that can keep a clean sheet at Anfield and Benteke is actually a great pick right now and even a strong FPL captain candidate for GW12.