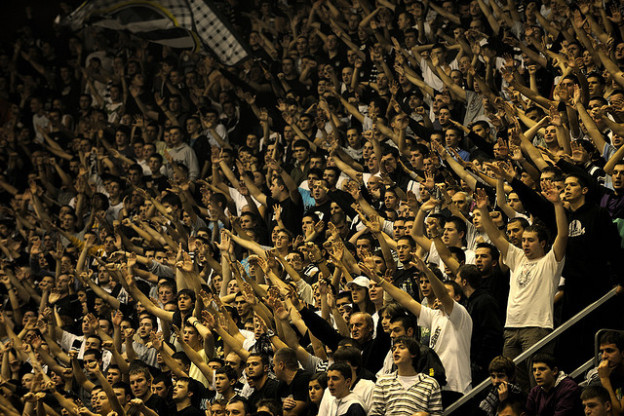 Euroleague regular season is drawing to a close and the excitement is peaking. Some teams have already been eliminated. Others are still fighting to advance or to get a better spot in the top 16. In this Euroleague fantasy article I won’t be calculating and picking fantasy players from “must win” games. To suggest you top 10 Euroleague Fantasy Challenge Round 9 Tips I’ll rather search for:

You should also keep an eye on injury reports and DNP’s due to fore mentioned teams that have been eliminated. But first, to cheer you up a little bit, we are starting off with a story that could easily be drawn from the “Hangover” movie.

“What I have done is not good. When we returned from the trip to Antibes I was very affected by the results of the team (ed.note: Limoges was defeated). I made a big mistake. I take full responsibility for my actions. I want to apologize to my teammates, coaches, the club and all the fans. A top player must be exemplary, which was not my case. I accept in advance the sanctions that the club will take. As a player of Limoges CSP, I must be an example for young people, I was not and I apologize”.

This was Heiko’s statement after he had been found sleeping in someone else’s apartment in his building. Why, you ask? Well, Heiko felt a little bit “blue”, after his team had lost to Antibes in the French League this week. He decided to have a few drinks. The result? He got drunk as an ox and got on the wrong floor in his building. He obviously taught he got into his apartment  (god knows how he managed to get trough the door), so he decided to roll over  on the couch. When the owners of the apartment saw him passed out on the couch, they immediately called the police. Poor Heiko ended up explaining to the police what he was doing in his neighbours’ apartment.

Anyway, club president Frederic Forte added: “Heiko’s attitude is unacceptable, especially given the current situation at the club. Now if I want to be positive, we can also see that everyone is affected by this plight through the club. We can tolerate a mistake made by a player who contributed a lot to the club since his arrival, both on the court and off the court, but not the second one. Contrary to what has been said, I want to clarify that Heiko was in the right building. It was simply the wrong floor, which is already quite comical.” So, Heiko will not be suspended, only fined. I will be involving him in my picks for the week, because I expect a reaction from him on the court.

He has already apologized verbally, but now I expect him to make it up with a good game against the Greek powerhouse. Limoges has already been eliminated but I don’t think Limoges will go down without a fight at their house. I’ll take my chances with him this week and I think you should too. Bottoms up for Heiko! He could be a good Fantasy Euroleague Challenge buy in Round 9.

This Serbian guard said himself two weeks ago that he had finally got his shape from the Eurobasket back. He indeed looked very good in the game against Maccabi, but I decided I need to see one more good game from him. And I did, he was the top scorer for Unicaja last week at Darussafaka. Considering the fact that his price is still just 21.5 credits, he looks like a good buy at the moment. Unicaja travels to Sardegna this week, where you can always expect a productive game. You can read more on productive games in my last Euroleague fantasy Challenge article. Nemanja has the athleticism to run with Sassari guards and I’m looking forward in seeing him on the court in Sardegna.

He came into the game against Sassari last week in total frenzy mode. He was taking on  the Italian champs almost all by himself. He ended up scoring 19 points in that game. He continued with his good shooting yesterday in the Israeli championship with 15 points. For a price of just 16.6 credits, he is definitely worth adding this round in your Euroleague Fantasy teams. Landesberg looks to be in shape and I hope he can continue with his good performances.

The third most expensive player when it comes to SG-SF selection, but I have a good feeling about him this week. Loko travels to face Karsiyaka in Euroleague round 9. I think he should have a favorable matchup against their guards as well as  their defense in general. Delaney has been  a little bit quiet lately, but I see him getting back on his MVP track this round. If you have enough credits, get Delaney.

Simon returns to Zagreb this week to play Cedevita in a do or die game for Milano. Simon played for most of his career in Zagreb, not for Cedevita, but for KK Zagreb. He spent 10 years playing for Zagreb and he always feels like home there. I know Gentile is back, but I still think there will be enough chance for Simon to show the Croatian young bloods who’s the boss. Expect good things from Simon in Euroleague Round 9.

A player who could be matching up with Simon on this game. That should not be a problem because Simon is not much of a defender. Babic is one of  three players along with Bilan and Pullen who are responsible for Cedevita’s renaissance. I expect him to  have a nice chance for another “all around” performance against struggling Milano. I also expect to see a high paced game in Zagreb. Babic will cost you 51.5, but he should deliver. Javier Gancedo trusts him this week also, you could too.

Strasbourg will be welcoming Khimki this week in a very important game for both teams. I’ve already written about Khimki’s weak interior defense so I won’t be repeating myself here. I’m just going to add that now their rotation under the rim has been shortened by Davis’ injury. Golubovic has got enough experience and quality to have a great game this week. I don’t expect him to dominate like Mike Zirbes did last round in Belgrade, but he should still have a very nice performance. 58 credits are not too much for Golubovic this round.

A big man against  a team like Sassari is one of the oldest tricks in the book. Since Richard Hendrix sat out Unicaja’s last Euroleague game as well as the ACB league game, I’m choosing the next best thing – Will Thomas. He plays at the PF position, but he is a good rebounder and a very reliable player in coach Plaza’s system.  I expect Malaga to take this game seriously as they are fighting for on of the top positions of the group. Tomas should get you a lot of rebounds and points for only 51.4 credits. Consider him for your Euroelague Fantasy Challenhe team.

Bayern will be welcoming Real this week and I think Bryant should have a good game. Real’s interior defense has been known to leak. Especially now when Thompkins and Nocioni are suffering some injury problems. Bryant is a great rebounder and that is always a great feature when you are playing Real. Bryant is also big and heavy guy that can create a lot of space from himself. I expect him to dominate the painted area in Munich this week.

For 39.4 credits as one of the “go-to guys” in Maccabi, Randle is pretty much undervalued. Maccabi will be playing against one of the most pleasant surprises of this years Euroleague – Brose Baskets. Randle will be taking on Nicolo Melli, for most of the game. Melli has been playing great this year, but he is not such a great defender. I don’t think that the Italian PF has got the power to stop Randle in Tel Aviv. Randle had some good games this season and I like him for this price in front of such an important home game. Randle has the capacity to go big while his price is small.

There you have it basketball fans. This was my Euroleague Fantasy Challenge Round 9 tips article with 10 suggested players. Do you agree with me? Who are you planning to buy this week? Please let me know in the comments below.