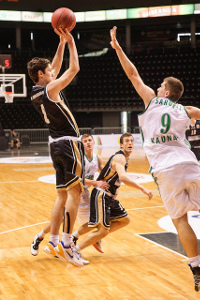 We are getting ready for the 3rd round of the top 16 phase of the Euroleague and as always we have some useful tips for your fantasy team. This week we are going for some cheap potential as our most expensive player costs only 53 credits. We are aiming for some guys that have been quiet lately and for some that are getting their old shape back. So this week we will be focusing our attention on players that are:

Top 16 Round 3 Euroleague Fantasy Challenge – On the rise

Tyrese Rice: We are starting this week’s Top 16 Round 3 EFC article with a player that is pretty much under priced at the moment. He costs only 45 credits and I consider him to be a bargain before a game against Laboral at home. This should be a high-paced game with a lot of possessions. That kind of games are always the best ones to be picking your players form. In addition, Rice is a player that likes a little bit of a faster pace because he likes to run and shoot a lot. Rice could be going for big numbers in this one. This week for the first time I’ll be going for both PG’s from the same team. Because I think that there is room for both of them to have a good game. Neither of the two Laboral’s PG’s are good when it comes to defense so I think there should be enough space for both Khimki’s PG’s to have a good game. So I’ll also be taking:

Petteri Koponen: A glance at his performances so far is not particularly reassuring, but I really feel Top 16 Round 3 could be his week. He has got the potential for much better performances than the ones he had been showcasing so far and I’m willing to try him out for only 23 credits. If Laboral’s defense should focus on stopping Alexey Shved, I’m hoping that my pair of guards could do the job for Khimki. Just make sure you check latest injury update on Koponen.

Cedi Osman: Osman has had some injury problems this season and he needed some time to get back into shape. All that has caused a major price drop for him and now you can get him for only 15.1 credits. He played a good game last round against Lokomotiv in the Euroleague as well as in the Turkish championship on Monday against Darussafaka. Osman led the way for Efes in the game against Darussafaka with 16 points. These two Turkish teams will be playing each other in the Euroleague this week as well. Only, this time, Efes will be the host. I’m hoping Cedi will continue with his good performances as I see him as one of the biggest “steals” at the moment. For only 15.1 credits he is definitely worth considering in Top 16 Round 3.

Henry Walker: He is a very good shooter and an athletic guy for Euroleague standards with a lot of NBA experience. He needed some time to adapt to the team and to the European game in general, but now he seems to be ready to contribute a lot to this Cedevita team. He has got the quality to be one of the best players of this team and with his current price of only 15 credits. I consider him a steal. Maybe this is not the best moment to be getting him because Cedevita will be visiting Malaga this week. But I just can’t look past him after he had hit the game-winning three-pointer in Istanbul last week. Darussafaka is also a good defensive team and he managed to play a good game. I hope he can even improve in Malaga this week. Walker is on the rise!

Cory Higgins: One of the biggest questions of this week will be whether Nando De Colo should play. He has suffered an ankle injury during the VTB league game this week and according to coach Itudis, he is questionable for the game against Barcelona. So I’m suggesting Cory Higgins as his replacement. He will certainly be getting more minutes if De Colo should be out. He is a very good player and could turn out to be a surprise for Barcelona this week. On the other hand, if De Colo should be ready, you better stick with him and keep an eye on Higgins for future games. As always keep an eye on injury reports.

Jaycee Carroll: He is pure shooter that has a 10+ PIR performance in almost every home game. I think there is a good chance for him to have a good game this week against Zalgiris. He owes one three-point clinic and I have a feeling he could present it this week. K.C: Rivers is back and there is nothing so stimulating like good old competition. For 30.8 Carroll is a great pick for Top 16 Round 3 Euroleague Fantasy Challenge.

Will Thomas: Thomas did not have such great numbers these last couple of games, but I expect it to change this week. He is still getting a lot of minutes and he is still one of the most important figures in coach Plaza’s vision. It seems to me that he feels much more comfortable playing at home and I think he should be one of the best picks from the big man section for this week. I see a favorable matchup for him against Cedevita’s inexperienced PF’s. Try out Thomas for 43.4 credits.

James Gist: After two below-average performances, I expect Gist to return to his level. Much like Will Thomas, he is getting a lot of minutes on the floor and he should also be hard to stop for Zvezda’s PF’s. I think his athleticism and power should be too much to handle for Quincy Miler and Marko Tejic. Gist is having a great season and I expect him to have at least one top 10 play of the week against Zvezda.

Ian Vougiukas: I’m going for the Greek big man for the second consecutive week. The reason is simple, Zalgiris is playing Real Madrid. What better pick that a dominant big man against Real’s interior defense. Vougiukas has been playing in a good shape this year. It seemed to me that he could have got much better numbers in most games if only coach Krapikas hasn’t been destroying his rhythm by benching him while he was hot. Now, there is no more Krapikas, because he was replaced by a Euroleague legend and his assistant coach Sarunas Jasikevicius. I don’t know what his coaching philosophy would be, but if he should have the same feeling for the game as he did as a player, Vougiukas could be one of those who will be benefiting from it. Javtokas is also still out so that fact also goes in favor of Vougiukas playing more minutes. All in all, I expect him to use his size to dominate the paint in Madrid. He is definitely worth adding for 50.2 credits.

Luke Harangody: The riskiest pick of the round. I already wrote several times why I don’t like taking Darussafaka players, but I don’t see any good options besides these three players above, in the big man selection. Anything could happen with Harangody this round, he could have a monster game with 20 PIR, but he could also be easily shut down by coach Mahmuti. Mahmuti makes it very hard to predict which of his players should have a good game, or even get playing time for that matter. But, Efes’ defense is not all that strong and I think a tough guy like Harangody could be finding his shots against them, if Mahmuti should let him, of course. I have a feeling he could do well this week, but can’t guarantee anything. So you should only go with Harangody if you don’t like my other 3 big guys for this week.