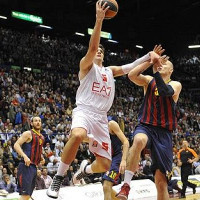 It is the final week of the Euroleague top 16 first phase and as always we have prepared a few tips for your Euroleague fantasy challenge team. Stay with us and find out which players could have good numbers this week.

Crvena Zvezda will be hosting Cedevita in their first ever duel outside of the ABA league. Cedevita is going trough a tough time lately because they now have 3 injured players: Zoric, Babic and Arapovic. Therefore, their roster has been shortened a lot. Coach Mrsic is forced to give extended minutes to young players like Musa, Mazalin and Katic in order to have a normal rotation. Crvena Zvezda is a very aggressive team that likes to play physical basketball with a lot of pressure on the ball. Stefan Jovic along With Branko Lazic is the key guy of Zvezda’s aggressive defense. Cedevita could get tired under Zvezda’s pressure and turn the ball over a lot. So I expect Jovic to pick some pockets and add some easy fast break points to his stat sheet. This is the regional derby between currently the best two teams in the ABA league and I expect Jovic to be the floor general for Zvezda.

Adams is yet to have great games when it comes to PIR in the top 16. I’m hoping it could happen this week. He had some high scoring games in the top 16, but he is jet to have a big PIR. If he should manage to improve on his shooting percentage a little bit he could finally repeat some of his great performances from the regular season. 46.6 is not too much for Adams before a home game.

Efes will be going on the very tough trip this week, so you could say that there is no place for such a young player on your team. But let’s take a look at the numbers for a minute. He has had a PIR of more than 15 in his 4 of 5 last games. That means that he has been playing very well lately and contributing to his team a lot. The thing that makes this player a really goos choice is his price. His current price is just 26.5 credits, which makes Osman one of the players with the biggest differential between his price and his contribution to the team (and quality too). For this price, Osman is a bargain.

I think it just the right time to get James Feldine into your team. He has been averaging more than 30 minutes per game in the top 16 phase and I think that the game against Efes is the perfect chance for him to show big numbers when it comes to PIR too. Besides been a very good 3 pt shooter Feldine is an also a solid defender a team player. Coach Djordevic trusts him a lot and I think it is the time for him to have an above average game. For only 32.7 credits he is worth a try.

Navarro got slowed down in the last few games by an ankle injury, but I think he should get back to his good performances this week. Zalgiris is a heavy underdog in Blaugrana, but I don’t think the
Lithuanians should surrender. They will surely be showing their teeth, so Barcelona Will need their Leader to step up. Navarro should feel comfortable playing at home and you should consider him for just 26.3 credits.

Zalgiris will be going on a tough trip to Barcelona this week, but for a price of only 22.9 credits, Seibutis is certainly worth considering. He is currently one of the most experienced players
on Zalgiris’ roster as well as one of their leaders. The game will surely be tough for the Lithuanian powerhouse, but Seibutis has got enough authorities on in this team to create a lot for himself.
Seibutis could be a good choice for a small price. He also had his best performance of the season so far in a game against Barcelona during the regular season.

His average PIR in the top 16 is 18, what more can I say?! He will be up against Real’s interior defense, which will also be without Felipe Reyes. Augustine is a useful player as he manages to get high PIR’s even when he scores just a few points. Of course, he takes down a lot of rebounds, but he also does not turn the ball over and has a high field goal percentage (76.3% in the top 16) Augustine has been playing well all season long and I think he is a must have this week
against Real.

Another very good rebounder from Khimki is on my radar for this week. you can’t expect big numbers from this American player when it comes to scoring, but he is an excellent rebounder and very physical player. I expect this game to be pretty high scoring and fast paced. I also expect
there will be enough loose balls for Honeycutt to collect and possibly to put them back with a dunk. Honeycutt could be the x-factor for Khimki once more.

Ante Tomic has been a mess lately. He has probably had the worst month since he had arrived in Barcelona. He is apparently in a very bad shape and that is one of the reasons why Barcelona has been struggling in the top 16 phase. So I’m going for Tomic’s replacement who currently costs twice as less, but has also been playing twice as better. Barcelona will be playing Zalgiris this week and the Lithuanian team has got only one “serious” center since Robertas Javtokas got injured. It is, of course, Ian Vougiukas. Although the Greek big man has got the size advantage on Lawal, the Nigerian native is much quicker. I expect Lawal to take down a lot of rebounds in this game
and also to have a very good field goal percentage. Another plus could be the return of Carlos Arroyo for Barcelona, because he was cooperating very well with Lawal before he got injured. The Portorican Guard really knows how to find Lawal and toss him the ball for an alley up.

For my last but not least pick, I’m turning to my old “playing against your former team” method. Hines has won two Euroleague titles with Olympiacos and I’m sure he has also got some good memories from those days. So I expect him to be very motivated for this game. He will be up
against Othello Hunter and young Nikola Milutinov and I think neither will be able to stop him if he should be inspired. Hines has been getting a lot of playing time in the top 16 and he managed to collect more than 10 PIR in all games but one. I’m hoping for twice as much PIR this week.